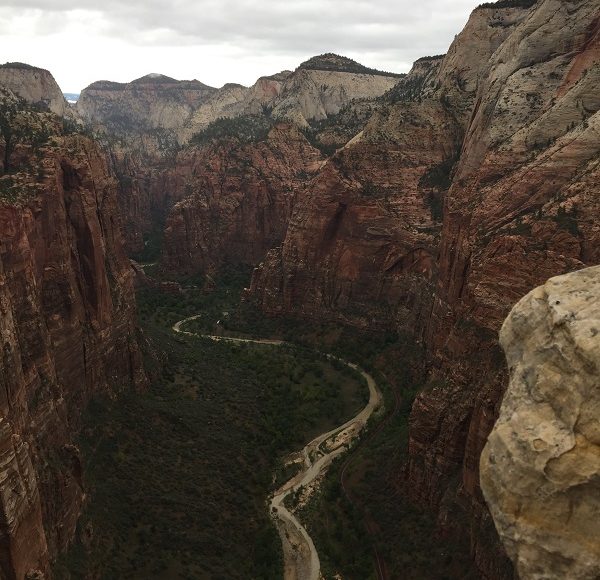 Angel’s Landing is considered one of the top hikes in the world. It is located in Zion National Park in Utah. Though it is not the highest point in the park, it has some great views and provides a strenuous climb.

We decided to get an early start for the Angel’s Landing hike, to make sure we were ahead of the crowds. We made it to the park still covered in dark and had to wait for the facility to open and the shuttle to start running. We spoke with the Ranger’s and the only warning they had was potential flash floods. We didn’t think this would effect us, as we were going up, not down. We filled our Camelbaks and loaded on the shuttle. It was a quick and short ride to the Grotto, and after crossing the street, we started heading into the wilderness, or somewhat. The beginning was gradual and was a dirt path in most areas, and somewhat paved in others. The gradual quickly made way to steep switchbacks with dropoffs on one side, as the path was carved into the side of the mountain. At one point, the path cuts into a valley. After the path flattened out for a little bit, we ran into The Wiggles, aptly named as the switchbacks are very steep and tight. We had to take a couple of breathers here, as the ascent was dramatic. Once we hit the summit point, it started to rain. The summit had a couple of restrooms and there were a lot of people taking a break. Of course, this is when it started to sprinkle a little bit. The girls pushed on as the guys debated the impact of the rain. The next portion was steep cliffs, basically traversing a ledge, with a chain to help you along. It does level out in some areas, with a three foot wide span and dropoffs on both sides, while other areas require some boulder climbing.

The views are great at this point, creating a distraction, good or bad, from the effort it is taking to move on. We were able to catch up with the girls, and then stopped to put a jacket on as it was getting colder with the wind and higher altitude. During this time, the rain picked up, and looking off in the distance, looked like a storm was coming. The girls were out of view at this point, and we decided it was time to head back, as the rocks were getting more and more slippery. As we worked our way back, we realized the girls were also on their way. So we paused briefly to fill in the group and continued moving across the slippery stone and chains. Obviously heading down was much easier than heading up, and the weather was back and forth between sun and rain.

We were all starving so we met family at the Zion Canyon Brew Pub. After all that hiking, a full sampler of beers was deserving. While getting ready for dinner, another bad storm swallowed Zion, dropping .63 inches of rain in an hour. This rain created the flash floods we were warned about earlier in a neighboring community, and in the park itself. We found out later that seven people went missing from these floods while canyoneering at Key Hole Slot Canyon. Later to be confirmed dead.