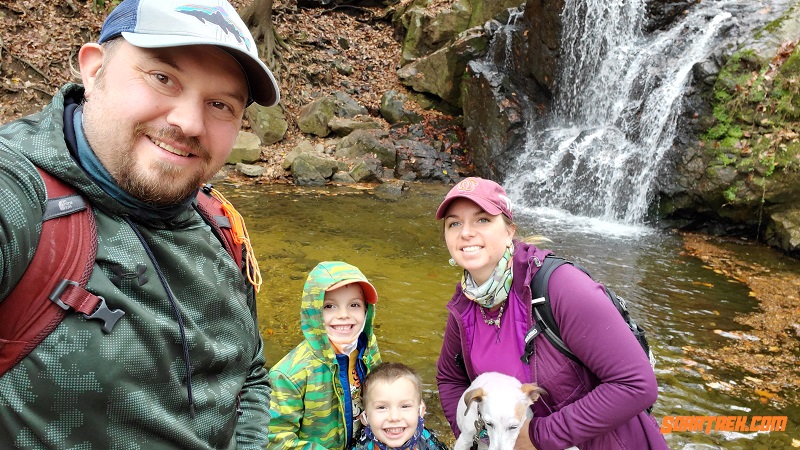 A while back we had visited another section of the Patapsco Valley State Park and we had hoped we were at the portion of the park that included the waterfall. So with a little pre-planning, we made sure this visit would put us on the correct trail. The park is not far from the interstate, which made access easy. The Cascade Falls Trail is located in the Orange Grove Area of the park, however to access this area, you have to drive through the Avalon Area entry and continue parallel to the river.

Shortly after parking, we realized some of the prep we had done was for naught. As we realized that we left sandwiches and other items back at home. Our packs are already loaded with snacks and it was too late to go back home, so we pushed on. Cell service became spotty, so we were hoping to see a map that we could take a picture of for use during the hike. We couldn’t find one, even after visiting the facilities. Oh well, off we went.

You don’t have to hike very long before you run into the Cascade Falls. This area proves to be pretty busy and we saw several groups taking professional photographs at the falls. After our quick stop and brief soaking of a shoe or two, we pushed forward. There were a couple of other water crossings further, but along with other hikers, these started to become fewer as well.

There are multiple connections and side trails as you make progress of the steady climb to the ridge. Luckily there were some blazes to help with the directions and in some areas AllTrails would pop up. After walking along the ridge for a bit we then started down again. There were some fairly steep areas and this caused some concern with the boys as they were close to the edge of the trail, Eli even stepped on a bunch of leaves and slid down a bit. At the end of the hike, there was a sign for Leave No Trace. This was cool for Eli, as he has been discussing this a lot lately in Cub Scout meetings.

After we finished the hike, we decided to stop in at Guinness Open Gate Brewery, which is very convenient, just about a mile down the road from the park entrance. They had outdoor seating and we were hungry from only eating snacks, so we decided to check it out. The Brewery did a very good job on keeping everything spaced out and would have been nice to hang out longer. We tried out the chicken and pork tacos, with the pork being the favorite, and the Pit Beef sandwich which was really good. The pretzel was the boys favorite of course, though the carb dip portion wasn’t all that great. It was a bit cold sitting outside, so we ate quickly and got back on the road heading home.