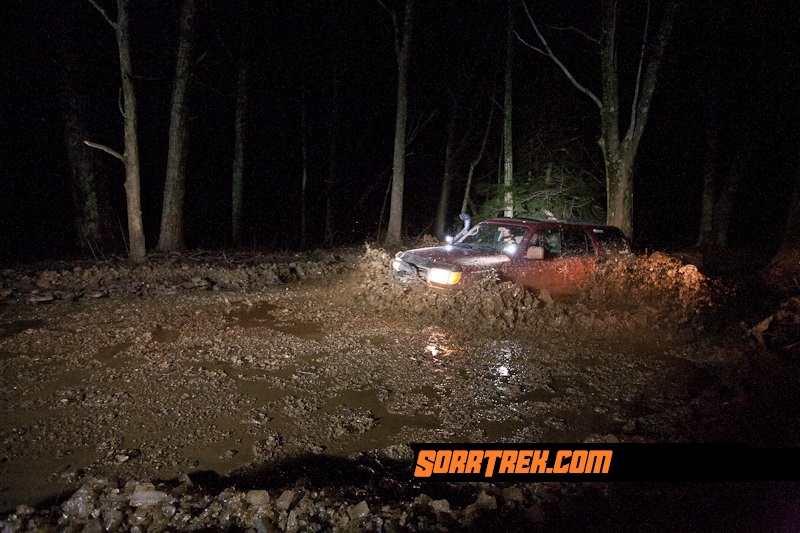 It is becoming an annual custom now that FORCE (Frontier Off-Road Club East) hosts a MLK Jr weekend event. This year, it was a joint even with VAXC (Virginia Xterra Club – http://www.vaxc.org/). It was to visit a relatively new off-road park in the hills of West Virginia, Twin Mountain Off Road Adventure. This park was created by John Bradshaw, who has been off-roading his entire life and has been competing in many overlanding trophies. He decided to build this park to continue his passion.

The event was set, and we had a decent group signed up go. The days before were to have crazy weather however, and due to that weather, a potential requirement for chains. Many of us did not have chains, and though they are great to have, I wanted to use the money for other modifications to the truck. So the days up to the event were a big question mark for some, and it was up until the few hours before leaving that we weren’t completely sure we were heading out. After some conversations with other members, we were a go no matter what. The park had temperatures drop in the negatives for windchill, and the ground was frozen solid a few days before the event. This meant that the upper layer was essentially slick mud on ice. As we arrived, John wasn’t even recommending hitting the trails with chains, as most hills were off camber and cut into the mountain side. Meaning, if you slid, you slid hard, and potentially over the side of the mountain. The park has a camping site, big fire pit, and facilities. Some of the members camped the night before, and it looks like something to remember for the future, as there is nothing else close by.

So to make something out of nothing, we decided to play on the skills portion of the park. There are a few water/mud pits, step inclines, off camber areas, log bridge crossing, and plenty of ground to play on. We had a few guys get stuck in various locations and one even centered on the logs. The biggest pride moment was to take it to the steep grade hill, made much more difficult with the mud layer. After cresting, the vehicles just slid down the remainder of the obstacle. Though we only got a few hours of wheeling in, it was great fun, and we all agreed that we needed to come back when conditions were better. With this park only a few hours away from DC, we have much to look forward to in it’s development. Big shout out to John for letting us wheel, and for breaking out the Unimog a few times.

While grabbing something to eat, the group was discussing what to do next. It was decided that a late afternoon to evening run was going to be made in the George Washington National Forest to set up for the following day’s ride. After gassing up, we headed down interstate 81, picked up a few passengers from JMU, and continued to the trail head. We took Union Springs Road up the mountain. It was a bit of a bumpy ride, had some areas of snow and ice, but didn’t have too many obstacles. There were a few rocky and steep incline areas, but the majority of the ride was smooth sailing. We did hit a small play area that had a few frozen over puddles. After breaking the ice up and running through a few times, we pushed forward. We made it to Meadow Knob, which is a clearing on the ridge. From what I understand, a bunch of people camp here. It was pretty dark, but looked like a solid camp site for future rides. Great view of Harrisonburg, and so we decided to take a group photo. (Editor’s Note – Would later realize that we would be visiting this trail and that we had also hit Flagpole Knob as well).

We ran into a few more obstacles. One of which was a rock drop off. Those of us who didn’t have the correct armor and ground clearance decided to go around, but there were a few who went over. Cell phone video capabilities just weren’t there, and so what we captured wouldn’t provide enough detail to what actually happened. We had another rocky incline requiring some spotters, and once everyone was up, we took the opportunity to bid farewell. Part of our group was going to continue camping in the forest that night, while the rest of us headed into Harrisonburg. We headed down the mountain on Dunkle Hollow and exited around Switzer Lake. It was a shame to leave the comforting darkness of the woods and enter back into cell phone service, but it was late and time to grab dinner and beers.