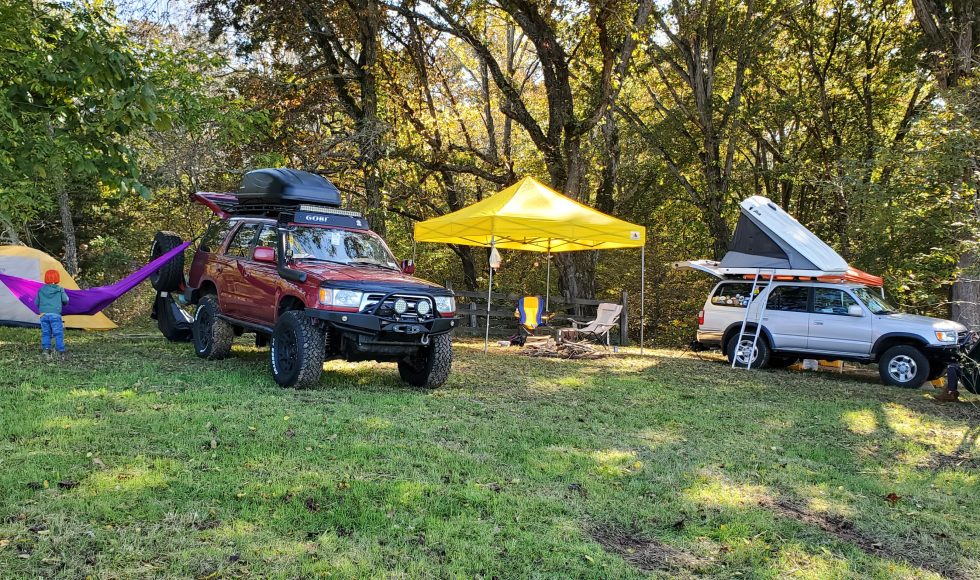 The RoofTop Tent Rally is an event that was organized by Blue Ridge Overland Gear, Ranger John Fury, and the James River State Park. We have now attended two other Rooftop Tent Rallies and it’s always a great family event. Not only are there programmed activities, but it’s also great to spend time with the family hiking through the woods or hanging by the fire. Through our previous trips, we have made friends and continue to meet up with them for the event. Sadly due to the Coronavirus, this year’s event was going to be capped at a lower participation amount, and so some of our group wasn’t able to grab tickets in time.

We originally intended on leaving for the Rally on Thursday, October 15th, however with virtual learning and school, we had to wait till Friday to get on the road. To make sure there wasn’t any delay however, we made sure to run any errands and pack everything on Thursday. So Friday, we packed up last minute items and food, and once the boys were done with their class, we got on the road. This was about 2pm on Friday, and we were shooting for arriving at the site around 6pm.

The trip never seems to go super smooth, and for some reason the GPS had us taking I-95, and essentially passing the park to then come back to it. Traffic wasn’t great as is normal for the stretch between DC and Fredericksburg, and we had hit a couple of areas of rain. On the way, we stopped for gas and Chic-fil-a, which pushed our arrival time back some more. We were pulling into the park as the sun was setting. We were able to check-in and meet up with Ben (thanks Ben for saving us a spot!) to set up camp. The grass was a bit wet, but found the best spot we could to set up the tent. Looking back at it now, we should have moved to an area that wasn’t as covered by trees so things could dry up during the day. Arriving as late as we did, we got everything set up and hung around the fire for a bit before calling it a night.

While you can attend the event on Thursday and Friday, Saturday tends to be the busy day for activities. Previously, the Gladstone Harvest Festival was also on that Saturday, which provided some additional family activities. We started the morning off by heading to the event tent to pick up information for the Scavenger Hunt. We checked out the vendor area as well, which had a lot of trailers and roof top tent vendors. Would be nice to have some smaller vendors with other items that people need during overlanding, camping, or offroading. While in the vendor area, we were able to complete a couple of the scavenger hunt items.

One of the requirements on the list is to visit the visitor center and make fishy faces with the fishes. So we headed up that way and kept our eyes open for some of the other items that we needed. The visitor center is pretty nice and has an animal display along with the fish tank. The gift shop is also pretty good and has some general items you may need as well as some nice souvenirs. We then headed back to turn in the list. The boys were able to pick their prize, Eli went with a fire color changing kit and Jax picked a glow stick lantern (though resembled and became more of a ball with how they played with it).

After a quick lunch, we grouped up with Ben and Jess and went on a hike. The park has a few trails throughout and they are nice and well maintained. This time we decided to take the Cabell trail, which pushed us further west, before joining the River trail to help elongate the hike somewhat. After wandering around, we arrived back at the site late afternoon and decided everyone was hungry already. So we prepped the fires and food to get to cooking. The wood was fairly green and somewhat damp, so there was a little bit of convincing to get them going. We think that with Covid happening, a lot of the wood that was stored ran out since everyone seems to be camping more, so they must have been using more recently processed wood. We probably went through 10 bundles easily though between the two fires over the weekend.

While we were eating the marinated beef kabobs, the band had set up and started playing. We had a great view of the stage and the band and the boys played around in the field after eating. The rest of us hung out, catching up some more, and enjoying each other’s company. As night time crept in and it was time for the boys to go to sleep. Seems that Linda fell asleep after reading to them, so I hung out for a while longer as we tried to reach bonfire status and fully test out Ben’s new firepit. It was cold again at night, though not as bad as the first night. Seemed as if everyone was able to get to sleep without too many issues, though I did try the buddy heater at one point.

In the morning, there are a few announcements and selecting the RTT raffle winner. We decided to skip that and slowly start the packing up process while also eating breakfast. We wanted to make sure the tent and other items had an opportunity to try, so after the morning fog lifted we laid them out in the sunny area for a bit. We also did a quick one mile hike around the visitor center and Green Pond to let everyone stretch their legs before the long journey back. The boys played with others, building a hay bail fort while we finished packing up. This was different for us in years past, as it was raining or really cold. So it was nice to take our time and advantage of the nicer weather for once. We were surprised however to realize that we were one of the last vehicles to leave the event.

We decided to stop at Devil’s Backbone Outpost for lunch. We had happened upon this brewpub years before, it was a lonely building in the middle of a valley. It is apparent that things have changed, as it was now a full facility with multiple buildings. There was a lot of activity and we realized that they had a festival of some sort happening. There was a stage set up, and roped off socially distanced seating facing the stage. We asked if we could order food and sit in the curbside lot to eat it, but they wouldn’t allow it. So we decided to go a little further and see if Blue Mountain Brewery was any less crowded. It was pretty packed however. Feeling uneasy about packing in and eating there, we pushed on.

As we continued pushing back on the route and heading closer to Charlottesville, we saw a sign for a pumpkin patch. We had decided before leaving that if we saw one along the route, that we would stop in so the boys could pick their pumpkins. With Halloween right around the corner, we didn’t want to miss any opportunities. So we decided to follow this sign. It continued deeper into the countryside, and we were starting to become concerned that this may have been a bad idea. The road then opened up and we saw Chiles Peach Orchard. This was more than a simple patch, it had a couple of buildings and picnic areas, surrounded by orchards. So we parked and investigated. The pumpkins were a bit on the pricey side, $15 for each pumpkin, but we didn’t want to miss this opportunity. So the boys picked two pretty large pumpkins from the patch and then we went into the apple orchard to fill up a bag of Fuji apples. They didn’t have peaches, as there was apparently a bad season for them. It was fun picking the apples, though Jax seemed to be the most enthused about it as he filled up the bag pretty quickly. We then stopped in the store to pick up apple cider donuts and an apple pie. The donut smell had been filtering through the air the whole time we were there, and eating them fresh was amazing. There is definitely a difference and highly recommend trying it sometime.To balance the donut, we also ate a freshly picked apple.

The snacks tided us over a little bit, but we were still pretty hungry. So as we entered the Charlottesville area, we saw Zaxby’s as a fast food option. Since everyone is good with chicken tenders, we stopped in and ate in the 4Runner. Food was pretty good and the interior of the restaurant was pretty nice (even if we didn’t eat in there). We filled up gas and got back on the road. We arrived late in the evening and it was bedtime for the boys. So we unpacked a few critical items, such as the donuts and apple pie, and relaxed for the rest of the evening.

I’d say we had another great Roof Top Tent Rally and are looking forward to future events for sure.