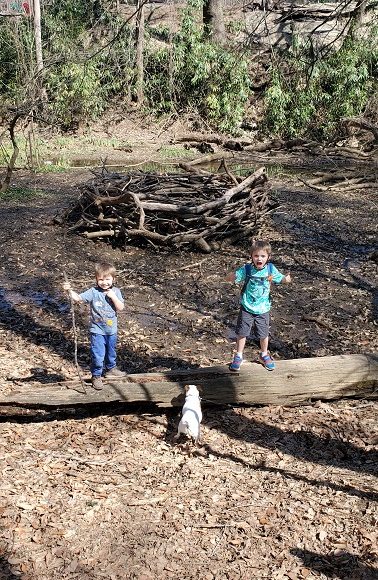 We have done a fair bit of hiking, walking, and exploring in Rock Creek Park, so much so, that I typically will only track it on Strava or AllTrails and not even consider it as a post, as it becomes more of exercise versus adventure. We have been receiving glimpses of spring, and so whenever we have the opportunity to take advantage of it, we try and do so. In this case, we had a nice day coming up but didn’t want to spend the whole time traveling in the car. Looking through a variety of options in AllTrails, I was able to discover the Melvin Hazen Trail. So we packed up the Ascent and headed into Rock Creek.

We weren’t the only ones who thought the day was going to be awesome, and upon arrival we realized that parking was going to be an issue. After doing a quick drive by of the parking lot next to Picnic Grove #1 near Pierces Mill, and a quick tour around the embassies for street parking, we headed back and parked at parking lot 2B. It’s across the bridge from the Mill and a little more of a walk, but we don’t mind some extra steps. While we did not get there as early as we may have liked, we did get there early enough. When leaving, the parking situation was even worse.

We have been to Pierce’s Mill multiple times and explored several of the paved and unpaved trails nearby, including going a few miles north and south. We headed south, walking past the restrooms and Picnicking area, and realized that we have walked by the branch to the Melvin Hazen trail many times. We stopped for a quick picture and got started. The trail follows along a creek, with several crossings.

There are two sections of the trail, the first being mainly a tight valley with the trail following along the creek, the other being a more open wooded area. The tighter portion is what connects directly to Rock Creek Park. The boys enjoyed navigating and bouncing along the rock outcroppings and exposed roots. They also had fun with the multiple creek crossings. It’s always great going for hikes during the springtime, and while it was early, we were able to see a few wild flowers coming out to bask in the sunshine.

The first section comes to Connecticut Avenue and requires a slight diversion from the trail maps. We had to walk north a bit to get to a crosswalk, as Connecticut Avenue can be fairly busy, especially with two little guys in tow. Once on the other side, it took a moment to figure out where the trail picked back up as we started heading north when we saw the Sedgwick Gardens apartment’s garden area. However, you want to head south towards the alley of the apartment building, taking the alley which leads to the start of the second section of trail. After descending a set of stairs, there is a newly constructed bridge that crosses over a marshy area.

We then headed up the hill again and almost missed a small wood fort in the middle of the creek. It looked like a giant bird’s nest, so we had to go in for a closer look. Seems a lot of the nearby kids play in this wooded section of the trail. You can see multiple branches coming from the edges as you continue along. As we neared the end of the trail, we noted a brightly colored pool of water. It looked like something you may see in a tropical area, as it had a greenish hue. Not sure if that was from the runoff of the nearby drain pipe. It also appears to terminate the creek at this point with just a few more muddy sections thereafter before coming to the end and streets again. We stopped so the boys could eat some snacks. Sadly, we forgot Jaxon’s peanut butter and jelly sandwich at home, so they had to share one. We headed back the way we came, and Linda and I started thinking of somewhere to go for a late lunch. While crossing Connecticut Avenue on the return trip, we realized that we were not far from The Italian Pizza Kitchen. We had had pizza there a few times in the past, so decided to head there after getting back to the car. Parking was even worse and the area around the picnic grove was fairly busy. We arrived to eat, sitting outside to enjoy the warm weather some more.

After we filled up, we decided to head to Georgetown. We had read a few articles about a pair of statues that were creating a stir amongst the residents on Reservoir Road. A homeowner decided to place artwork that was created to look like Bumble Bee and Optimus Prime from the transformers. It was pretty cool to see in person, though the Optimus seemed awkward since it was on the smaller side. The boys enjoyed taking pictures before heading home.

We discovered afterwards that it appears that Melvin Hazen has quite the history in DC as he was a commissioner for the district during this time. Some of his impacts were positive, such as preserving parkland and helping the design of the DC flag, but he is also known for wiping a whole african american community (Reno City) in DC off the map.