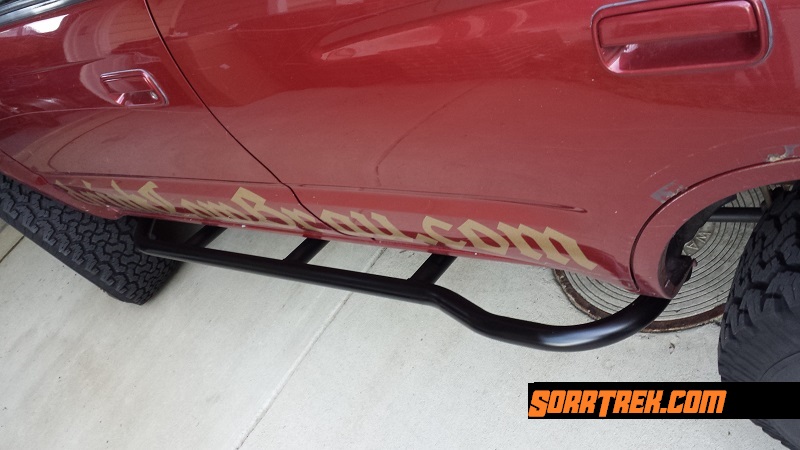 When I first got the 4Runner, it had running boards on it. Now these are great to be used as steps, but they don’t do well to protect much of anything. In fact, during one of the offroad trips, part of the running board was ripped off and left somewhere in the woods. I saw an image afterwards of a 4Runner that had some tough looking bumper and sliders, and always figured it would happen at some point. I had something similar on my Jeep Wrangler back in the day and always knew they were effective and useful. Though I’m later realizing these were what are called nerf bars and aren’t actually very affective. However, other modifications became priority in my mind before the sliders. After a trip to Rausch for the GPAX Shocker Run over a year ago, one of the FORCE members mentioned I should get some and that he would help make a pair. His truck had some nice tube bending and welding, so I was game. This was in fact the second time someone had made this offer to me. The desire for the sliders had also escalated after another trip where I saw some put to good use. Life can get in the way sometimes, and so it went from building them from scratch to ordering a pair and installing them. So after a ton of research, I decided to order a pair of the DOM with a kick-out from 4XInnovations. They had a great price and plenty of people vouching for them. Order was placed after Christmas, and happily they did not take as long as expected to arrive (I’ve seen some estimates in the 5 month range for other manufacturers, whereas these showed up in less than 2 months). Timing was again not in my favor, and so they sat for a while in the garage. This resulted in the initial offer for welding assistance to have disappeared. So I checked a few off-road/overland shops in the area, and received pricing ranging from $400 to $800. I was a bit surprised. Wanting to get them on before summer started, as trips and scheduling would become even harder, I called up my friend Matt who had also offered. Now, luck was on my side, and everything worked out perfectly.

I woke up early to head out to his house, and along the way, ran into a bunch of heavy rain. I was starting to become concerned that this would not happen. Upon my arrival, the rain stopped and though a little windy, the sun would eventually peak out. We picked up some welding gas and started putting a plan together.

First step was to place the jack stands and mock up the fitment. This allowed us to see the mounting points, final angle, and figure out the next steps. At first we were going to measure out a bunch of stuff, but once we had the mock up set up, we realized that there were only a few natural locations for the connections. The sliders came with three tubes for connection to the frame. One would go in the center, and the other two as far to each end as possible. Due to some body mounts, these were located inward a bit.

Not sure why, but two of the brackets were longer than the others. I’m assuming this was because it is somewhat of a universal kit (fits 1990-2013 4Runners. So we cut them down. After some grinding along the edges and the mounting plates, it was time to weld the bracket tube to the plate. The plates had 4 holes in them, assuming for people who want to bolt to the frame. The tube was close to the bottom of the plate, based to the alignment we noticed during the mock up. We also attached the gusset on the top. Since the force will be pushing upward toward your vehicle, this is a must.

We then did another mock up. Again, we were being very technical in our approach. In reality, we had a lot of luck I think. We had some angle steel sitting around that provided just enough lift to the brackets for the right amount of angle. I’ve seen some guys angle it a lot, however I only wanted a few degrees. I can’t tell you the final angle, but it fit exactly as desired, in fact, couldn’t be tilted higher. As previously mentioned, the mock up showed us the best location for attachment, so we did another mock up with the jack stands and marked the locations. These were then welded. Only two are shown in the pic, but the final center one was added the same way. At this point, we had to make another trip to the store for welding gas. We made it back to the house only to realize that they had given us the wrong bottle. So this warranted another trip. Somewhere in there, we also decided to grab lunch.

With the brackets attached, we grind down the frame to expose fresh metal. There was a moment of pride to see nice shiny metal hidden under the aging point. It also reminded me that I needed to strip down the frame and refinish at some point, since old 4Runners are prone to rusty frames. We used a series of jack stands, clamps, and man power to hold the sliders in place as they were tacked down. Once tacked, Matt went to work welding the plates to the body, and then rosetting the 4 mounting holes. We thought this part would go pretty quickly, but it took a little longer than expected. Not sure if it was the wind or the angle of welding, but we had a lot of sputtering and the welds weren’t coming along as nicely as the previous jobs.

I know this may not be the best method, and we discussed another, of welding out from the frame. Though our method had some issues along the way, we felt there would have been more room for error doing the other method. The notched tubes to the slider for instance.

We finished much earlier than I was expecting. So I stopped by the auto store on my way home to pick up paint. I wanted the matte finish, and found some “nerf” bar spray paint. Family was still out and about, so I decided to try and tackle the painting. I used some old drawings that were about to be recycled and taped off the side panels and laid some protection for the driveway. I was able to apply 3 coats on each, and was even able to get the sliders and frames completely. Figured there would be touch up down the road, as they will be sliding at some point.

The painting went well, and everything came out better than expected. I’m still getting used to having them there. Another reason I removed the running boards was I didn’t use them as step and so my leg would always rub against it (getting my pants dirty). These rub my leg as well. Guess I’ll just have to raise the 4Runner up so that I have to use the step…

Big shout out to my friend Matt for all his help. You can always throw some support his way, by picking up some www.josephmagnus.com. For more info about sliders (these were the 1990-2013 4Runner DOM Rock Sliders w/ kick out) and other great products that 4XInnovations have, check out their site: http://www.4xinnovations.com/