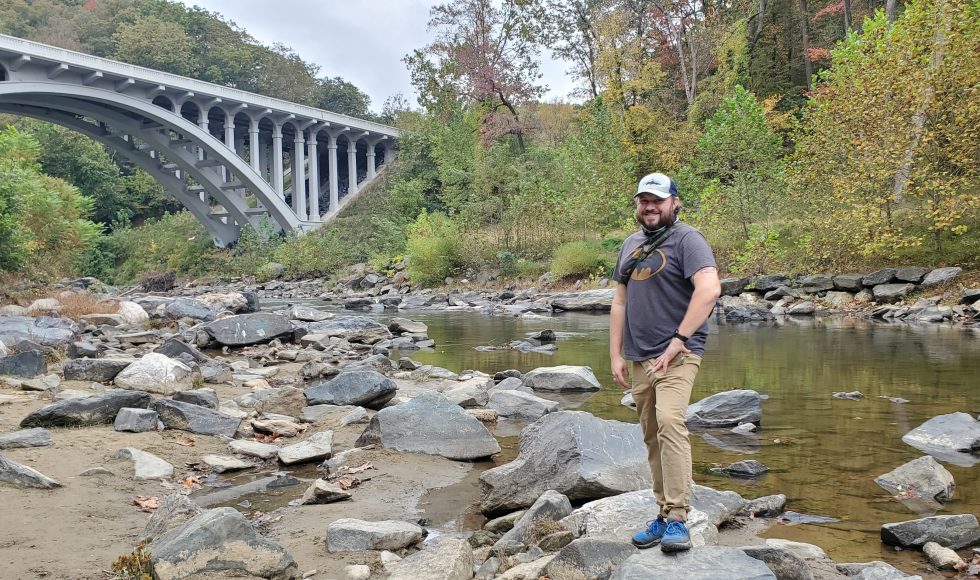 We have been wanting to hike Patapsco Valley State Park for a while now, so after dropping off the boys at their grandparents house, we decided to give it a try. Our main goal was to see some of the water falls or other features. We should have spent more time looking through the park information, as we selected the Hollofield location, which did not have the waterfalls we were looking for.

The entry to the park can be tricky, as it has it’s own cloverleaf and is a quick turn off of the main roadway. Once in the park, there are several really nice playgrounds and a decent amount of picnic areas and shelters. One of the shelters we looked at had a fire place, plenty of seating, a kitchen/prep area, and a large grill. It appears some do have an extra charge, but want to check these out for use down the road as they were pretty nice.

Once we parked, we decided to check out the Union Dam Trail. The initial path is fairly steep and brings you down to the water line from the ridgeline. There are jagged rocks and some other footing concerns, but we made it down with little problem. The dam appears to be gone now, but there is a nice little beach and water access. On one side was a nice bridge, and you could still see some of the structure of the dam and other buildings that may have stood in this area.

We continued along the trail and crossed the railroad tracks. It was cool to see the tunnel and the tracks disappear behind a turn. This is where the trail became a little lost, so we had to determine where it picked back up and trying to find the blazes weren’t as easy as one had hoped. We were able to get back on the trail and ended up at the access road to the campground. Other than the water and tracks, there wasn’t much excitement on this trail.

This trail was starting to wind down, and since we hadn’t really done much hiking yet, we decided to check out another trail and crossed under the main roadway to the other side of the park where we picked up the Ole Ranger trail. This trail carried us through multiple forest types it seemed, from lush forest to an eerie vine covered tree area. Some portions of the trail had a lot of mica on the ground, which made it look like it was covered in large chunks of glitter.

We also crossed the power line easement, which was recently maintained proving it difficult to find where the trail restarted. We did find a turtle when we mistakenly went the wrong way. Navigation continued to prove difficult, as the trails weren’t marked as clearly as they could have been. The nicest thing about the Ole Ranger Trail was that there weren’t any people. We were alone for this whole portion of the hike.

We ended up coming out on the road near the Park Headquarters and decided not to continue through the woods at this point. We decided with the rain starting to pick up (due to Hurricane Delta) to continue back to the car and start heading home. While we didn’t see what we were hoping to, it was a nice hike and time anyway. We are definitely going to look into the other parts of the park though, and looking forward to further exploration.

Amenities: Pavilions & Shelters (may have a fee), restrooms, playgrounds, campgrounds, and fishing